How can we help you?

‘We’re allowed out again.’ I hate that (already) clichéd statement, but we were indeed allowed out again. After 3 years of preparation and postponement for well-known reasons, ‘The Podcast Show’ took place for the first time in London on 25 & 26 May 2022.

Dozens of exhibitors gathered at the Business Design Centre in London, with over 300 speakers, all of whom have something to do with podcasting. Attendees included well-known tech platforms such as Spotify and Amazon, producers like The Guardian, Global, Wondery and Auddy as well as audio equipment companies, advertising agencies and everything in between. There was also a fantastic line up of guest speakers.

I’m Daan Brands and I’ll summarize the sessions I attended in this blog. In all honesty, some sessions were better than others during the two-day podcast show. Some didn’t really cover much new ground, and some were basically glorified sales pitches. Other than that, there were also plenty of really interesting insights from many different perspectives within the podcast landscape.

So, what was covered in this conversation? It might not be a particularly new revelation (the first but certainly not the last example of this at the event), but a good interview starts with proper preparation. No matter how casual Louis may appear, he meticulously prepares for every discussion or interview. He also said that this applies even more to podcasts because you have less opportunity to steer a conversation. Emily adds: ‘Proper preparation also ensures that you know exactly when to intervene, let the guest talk or ask the next question. It’s how you make an interview look effortless.’

Louis started an interesting podcast series during the lockdown with ‘Grounded’ for BBC Radio 4. In it, he talks to all kinds of people who had previously been too busy to talk to him. He elaborates on his conversation with Ruby Wax, who is seen as a rival of Louis. Especially because they were in the same boat in terms of documentaries and timing and after Ruby said in an interview in the early 2000s that Louis made her want to vomit. They’ve had a distant relationship ever since. He tried to tackle that awkwardness right away and delivered an amazingly enjoyable conversation that lasted over an hour.

Emily added that providing the right setting for an interview also helps the guest feel more comfortable, which results in better conversations.

Lastly, Louis Theroux shared the funny anecdote that there were more creators than listeners early on in the podcast years because doing them is so much fun. Louis drew the comparison with poetry. 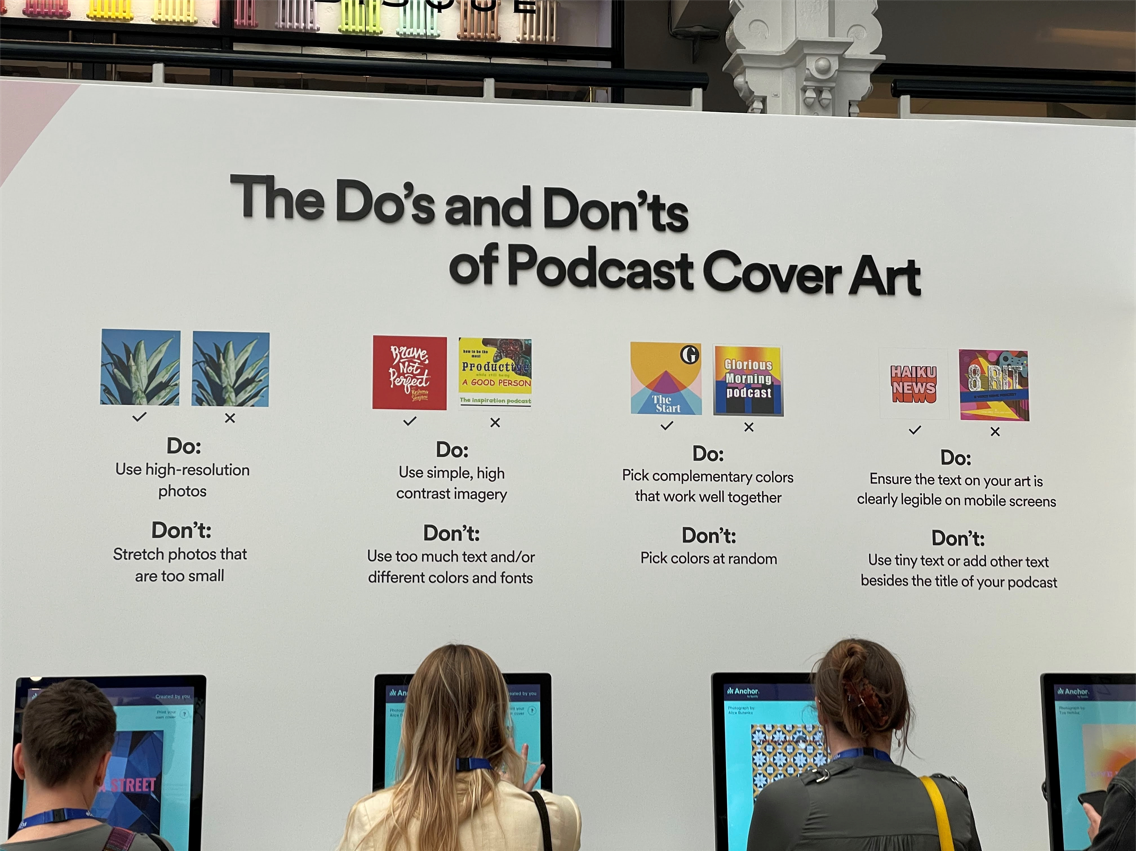 In the second session of the day, we were guests of Audioplus, an audio agency specializing in brand partnerships in the audio domain. The case that was highlighted was the collaboration between the cycling podcast ‘The Roadman Cycling’ and Discovery+ streaming service. The Roadman Cycling is created by former cyclist Anthony Walsh. The success of a podcasting partnership involves a number of things:

— Make sure the advertiser is a good fit for the community so that all sides benefit, this includes the creator, listeners and brand.

— Patience: a partnership only really finds its feet after a few months, not a few days.

— Make sure your episodes are live at a fixed time and preferably frequently.

It’s amazing that The Roadman Cycling podcast appears no less than 6x a week. This requires a lot of discipline, but it has done quite a bit for building the community. The episodes have been downloaded more than 100,000 times.

In this session hosted by the Insanity Group, media veterans Kirsty and Issy talked about success factors in collaborating with brands in podcasts. The takeaways from this session include:

— Podcasts, especially in a niche, are ideal for contextual targeting.

— Host reads ensure that there is emotion in the message. This works as a USP for audio.

— Insanity’s own research shows that 69% of the listeners got to know a new brand through podcasts and 72% took action in response to a podcast.

— Ask listeners for feedback about the partnership and don’t take the audience for granted. To remain authentic, be careful in your choice of partner.

The UK-based IAB session featured multiple speakers talking more about why podcasts belong in your media plan. I’ve listed the most important points per speaker.

Getting noticed is difficult with consumers, we select what is most relevant to us. Twenty-two percent of Gen Z use ad blockers and this generation has a very short attention span; it will be even more difficult to grab the attention of the upcoming Gen A. One important way to get attention is to be really relevant and quickly attract attention in the podcast itself. This can be done by a titillating or thought-provoking statement.

Lorna discusses a branded podcast case with Klarna. The podcast is called Money Talks and is about personal finance. The briefing shows that they’re seeing exponential growth in the customer base, but people regard them primarily as a party that facilitates irresponsible spending. In addition, there’s a high level of private debt in the UK.

A third of people in the UK believe they will never get out of debt and a third also say they are afraid to talk about money. Klarna wants to use the podcast to make it easier to talk about money. Acast combined the branded podcast with a card game that included 50 questions about money and finance. This was supported with tips compiled by psychologists and experts. The game was shared among Acast’s podcast influencers network, which allowed many different target groups to be reached in a short time. We’re talking about a total of more than 3 million listeners with an average listening time of 36 minutes per listener. Interest in the game exceeded all expectations. In total, there were 17,000 requests for the game (while ‘only’ 1,000 had been made). Research shows that Klarna’s brand trust has increased enormously among the listeners.

Richard shared with us the 7 reasons to choose podcasts in your marketing mix:

— Intimacy: the listener wants to listen to you and is therefore more emotionally connected.

— Intelligence: On average, a podcast lasts 30 minutes. You can add context and emotion. The target group is also younger and more educated.

— Immediacy: you can respond to current events and immediately go live with the podcast.

— Talent: create a long-term collaboration with a talent and strategically connect them to your brand instead of a transactional and short collaboration on social media.

— Quality over quantity. Include looking at total listening time to your brand as a KPI in your goals, so downloads x listening time. You’ll be surprised how long people listen versus a radio campaign.

Want to know more about The Podcast Show London 2022?